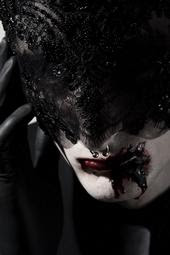 Naturally please tell me a little about your selves. When did you first form,and have you both been in any other bands prior ?

Lee Bulig: We have both had projects before and both contributed to each other’s projects in one way or another for almost the past 10 years. In hindsight, it seems kind of ridiculous that we never really did a full collaboration together until now. That said, it is really a plus that we didn’t fully collaborate until now. I think within electronic music it is especially easy to slip in to writing generic rubbish. Everyone uses the same gear, software, production tricks all pulled from the same websites and magazines. It is surprising that a lot of top acts hide how they do things like ninja secrets, because they sure as fuck ain’t doing it the way you read it on gearslutz.com

When I have seen Pete in action in his studio, I’m usually pretty bewildered by how he goes about business, and I daresay he feels the same about how I work in my studio. Put the two bewilderments together, and you get the sweet, sweet sugar known as Shiv-r.

In the first weeks and months, did you have a set first set goal, on visual attitude, and the whole initial sound of the music itself. How long was it before you were overall 100% happy ?

Lee Bulig: The project really just wrote itself out of necessity. It went through a lot of stages in the mechanics writing music between two countries on opposite sides of the globe, but that development is not the kind of thing we ever consciously discussed or tweaked. As the venerable Homer said “it’s just a bunch of stuff that happened”.

I think the thing to remember is that being an active musician is as pragmatic as it is artistic. There are plenty of great artists out there who just never seem to be able to finish a song, let alone an album. Then, if you are lucky enough to find someone to release your music, your life is full of deadlines and other commitments. Shiv-r getting to where it is today has had just as much to do with both Pete and I being able to deliver the goods in a timely manner. That might be an artistic sin to say, but it is the reality and the reason so many greater artists than us will go unrecognized.

So, to actually answer the question, from my perspective, there was never much of a goal, other than just getting things done. I don’t think either of us are 100% happy with any of the work we have done for Shiv-r, but if it weren’t for those deadlines and commitments, whether self imposed or slapped there by pimping record label folks with their fur coats and feathers in their caps, there wouldn’t be much of a project.

Please tell me about 'Parasite', your début MCD, I believe, or is there any material pre-dating its release, such as demo's etc. ?

Lee Bulig: We are far too frugal to be throwing out finished tunes. If we write a tune that turns out like shit we just release it under a different name. Why don’t you take a wild guess at what that project’s name is? Go on, take your pick, think of the shittiest faceless industrial act you know…

With 'Parasite', how was the first feedback, and are you 100% still happy with it. Do you think the press has treated you well ?

Lee Bulig: Parasite was never really intended to be a public release, or at least that was the plan when we wrote it. It was a sampler to give out to labels and the like. If you listen to the tunes on the disc you can hear that it is all over the place stylistically. The plan was to throw it out there and see what would happen. We considered making “Fractured Light” the title track, seeing as we didn’t know what kind of sound we wanted to present ourselves as. If we had found ourselves on a label that was pushing for more of the “Fractured Light” kind of sound, Shiv-r might have become a very different kind of project. I’m just too Zen and easily swayed by label folk, what with their fine jewelry and fur coats.

Pete Crane: Parasite was enough to get the interest of Infacted Recordings’ label-boss Torben Schmidt. I handed him a copy at a festival and a week later I got an e-mail from him saying he was interested in us. This was amazing because we had set our sights specifically on signing to Infacted. So our Parasite EP got the absolute ideal result for us! It also got some good feedback from the press in general, but the most important result was Infacted’s interest.

How would you best describe, your lyrical approach, do you tend to favour a particular concept, for each release. Or do you find observation and experiences, and the current climate, more leaning to your way of thinking ?

Pete Crane: With Hold My Hand and Parasite, it was entirely internal and a lot of the lyrics were stream-of-consciousness. These were written while I was living in London, which is a city which really forces you to put up a wall around yourself. There’s such an absurd level of belligerent indifference, especially in the poorer areas and it’s confronting to live on a day-to-day basis. So the lyrics are very claustrophobic and internalised, based on how I felt at the time. The lyrics for our new material are turning out a lot more externally influenced, taking in existential and activist tones. So the lyrics are constantly evolving.

Lee Bulig: You know there are children in Africa with no genres at all? And here we are with a gluttonous gloopity gloop of genres going to waste. Perhaps we could give them a genre we don’t actually like or need, like New-Age Ambient-Dub. If you feel like giving Shiv-r a genre, I ask you to do this… throw the some appropriate words into a hat and pull out a few at random and then put them in a logical order ending in the words “dark electro” or “industrial” . Use the following possible descriptors as examples:

Your début full length, 'Hold My Hand', well tell me more, how was its creation. Is there a set theme running through it, be it a set concept ?

Pete Crane: Hold My Hand, as an album and a concept, is an invitation. As most of the lyrics are very internal and the atmospheres of the music are very suffocating, the intention was to get under the listener’s skin.

The video, 'The End', left me intrigued. Seeing a young lady, being converted from, plain 'Jane', to 'Hot Rubberised Fetish Babe' !. When referring to 'The End', what's your initial meaning, be it the end of her life, or her way of life ?

Pete Crane: It is the story of one girl who “accepted our invitation”, to come into our world. The girl was drawn to “The End” despite warnings along her path and the transformation is what happens when she arrives. Of course, a lot of people made the comment that they thought she was being “raped” in the filmclip. Well, it’s worth mentioning that her attraction to the world she finds herself in is of her own volition, and that in any major city in the world you can find an underground scene where you can find these torturous activities being acted out on willing participants. Flaying, bloodletting and whipping are done willingly all the time and it’s this kind of dark attraction that is the theme of our filmclip. Sometimes it’s overwhelming to let go…

Your whole feeling is very dark, almost an 'Occult' feel, maybe, is this something that interests you, and who would you say are you major influences ?

Pete Crane: I haven’t been interested in the occult since I was a teenager. With Shiv-r, we can actualise the darkest and most esoteric concepts in our music and live it in a real and visceral way. We can create a monster and wear it like a skin – so we have no need to escape into a world of mysticism.

Can you remember your first live show, what was the first reactions like?

Pete Crane: With Shiv-r, our first gig was only last year in 2009. But of course we’ve been touring for years in our other projects, and have both been playing concerts since we were in school, in jazz ensembles and metal bands for as long as I can remember…

What can we come to expect, in the coming months, any new material in the pipeline, or live shows planned ?

Pete Crane: We have a new EP entitled “Incision” which will be released in December 2010 and is now available for pre-order from www.deathwatchasia.com. This follows the tradition of our “Parasite” EP and includes Virul3nt and Kong mixes of the title track, done by us individually. The EP will also include a collaboration with Preemptive Strike 0.1 on a track called “Zeitgeist” and an all-new Director’s Cut of our filmclip as a data-track. Our next live shows include an Australian tour with Combichrist in December 2010, and a European tour in August/September 2011.

Thanks guys... any last words to the masses ?