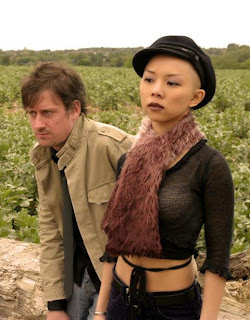 
When did 'Greenhaus', actually form, and what can you remember from the first days ?
In 1998 I think! It came about out of a remix for Gary Numan that we did – we needed a name at that time, and that how we started! Prior to that we had done shows in other bands, and had a few releases on different dance and techno labels – but not in a band environment as it were.
Before the debut LP, were there any 'Demos', made. Did you have a initial masterplan. ?

There was 100’s of demo tracks, but no real demo album as such. We basically went through the demo’s for the first album and re-recorded parts or the whole tracks in order to put it together. That’s why the first album is very diverse.

Your stunning debut 'The Unmistakable Sound Of Sloth', what more can you tell me about it's creation. Does it follow any particular themes, the music itself differs strongly ?

As I mentioned, we had a lot of material, ranging from electronic, to a more experimental post rock vibe. I think the album was a bit rushed in the end, as we had to have it ready prior to our tour with Mesh. It would have been nice to carry the post-rock electronica theme of ‘stoned’ and ‘dioxide’ over a few more tracks, and to have more time to make it a longer album. That said, it’s nice that it is varied so maybe the timing was just right.Generally it went down well although it was a bit of a struggle to put of live, especially in Germany where a singer was expected! We wheeled in a DVD backdrop which helped matters – and made things a bit more

Who would you say are your major influences?

We are fans of the Cocteau twins, Sigur Ros, Massive attack, Talk Talk and New Order – to name a few – Along with a lot of post rock bands. These have definitely influenced the material over the years.

Within all your works, do you have a particular method of working. Each LP, is very different in sound and form, is this intentional ?

It is very intentional. It keeps it interesting for us, as well as (we hope!) the listener.There is so much to explore, it would be a massive shame to stick to a formula, and not search out these other avenues of sound.We write the music first, and then the vocals will be added, and then the whole thing rearranged ‘till it all works together which can take months!

'Another Life', soon followed, again a great shift from the more ambient debut, how did you become involved with 'Sandrine' and 'Lahannya'. This was certainly a great change and move, how has the feedback been, certainly still my favourite ?

Yes, we got good reviews for this album. We wanted to introduce vocals for this album, so as well as Sandrine and Lahannya, we had contributions from Roi from Mechanical Caberet and Liz from swarf – all of which did a fantastic job, and all a pleasure to work with. There are still a couple of instrumentals, as we enjoy those.

Then came the third 'Your Not Alone', similar in pattern, yet different. Sporting 'Phoenix', now on vocal duties. Can we see her now as a permanent fixture, and doe's she sing on the forthcoming material?

Phoenix is a permanent fixture, along with Anthony Neale who sang on ‘You’re not alone’ as well. On this album we moved away from the electronics to a degree. We introduced live drums and percussion, as well as violins, flutes and violas, which was something that I have always wanted to do. There were many guest musicians on this release – it took ages!

How do you find, your material translates into the live, arena?

Lastly what can we expect from the forthcoming 'Fools Paradise', a DCD I'm lead to believe. Like all your creations, can we expect a shift in musical styling, or lyrical approach? Plus are there any excepts available ?

‘A fools paradise’ is a lot darker than all previous releases. It is a lot more electronic than ‘You’re not alone’, and I guess similar to ‘Another life’. It has taken a while, but now its finished (relief!!), and we are all very happy with the outcome. Clark, our bass player has coined a new genre called ‘trip-goth’ as a description for its style!! We were going to do a double CD, but we have decided to release a separate album called ‘instrumental’ which is self described! This is a much more ambient offering with a lot of soundscapes – more akin to ‘you’re not alone’. The feeling was to have 2 different albums rather than trying to make the different attitudes of the sound fit together. The 2 albums will be available in the early summer.

Lastly catch them live at 'Gotham II', along side 'CLAN OF XYMOX'.