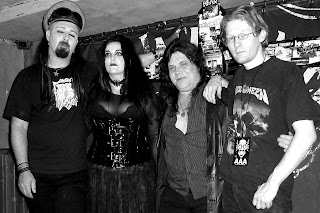 You first formed around 1997, what were times like back then.What was the scenes reaction to you at this point ?

Yes times were hard, thank god for 'Nightbreed', we had loads of shows with the first lineup... But never got to do them... But at least we got the 'Love Of The Moon' EP done before the split... The scene then was pretty cool... God the old days... Loved them... Lol

There have been many themes hidden within your songs, does the occult play any part in your lives, either in actual practice, or as a general interest ?

One thing I have noticed, is the great quality of all the artwork done, on your releases. Have all you releases been done by your good self. Has art also been a major point at one point in your life ?

Yes I love art... I have done the art work, wait until you see the new artwork for the new EP... Coming out this year. All artwork so far has been done by me, but for the people who suffer old cover was done by 13 candles Justin, but it was that bad, I had to get rid of it, and design my own.

In 2005, you released 'Spiritual Cramp', a tribute to the late 'Rozz Williams'. Has he always been an interest, and do you consider him a major influence on the bands music ?

What exactly happened, you started to tell a quirky tale, regarding 'Molly Lee', can we expect her to to return to the live set any time soon, as this I feel is one if your key signature songs ?

'Molly Lee' was a witch from 'Stoke On Trent', she was a old witch, and died. Then they put her body the wrong way round, so they had to dig her back up, and put her body the right way around, its all in the song, but its true what happened, but as a song to come back in the set list. Maybe in the year 2011.

Apart from the live shows, and the Nightbreed support etc, what we expect to see from you in 2010 ?

Kickin ass... We have some dates already... London as well... Waiting on to hear about 'Whitby Goth Weekend' for 'OCT', cool. We have a new 'EP' coming out at some point this year... Called, 'Undecided Suicide', its on 'Nightbreed Records'. Plus I should be getting married again, in June. Maybe even becoming a 'Dad', Lol.

The music itself, apart from 'The late Rozz', who would you say inspires you, what makes the mighty 'Lemmy', tick ?

Lastly, the music itself, which you produce yourselves, has there been any interest by any pro-labels. Or do you feel your style would compromised, and you have 100% control of the 'Lupine', machine ?

Well we would not go under a other record company,we are on 'Nightbreed Records', one of the last bands on there. So we feel we that, Nightbreed have been a great support to 'Lupine' for the last 12 years. So we will never leave them, 'Trev Bamford' is a good Friend of mine, and I love him for what he has done for 'Lupine'. We will carry on realising stuff on Nightbreed until the end, 'Trev' doe's most of the mixing at the Nightbreed Studio,for Lupine, and we are recording the new 'EP' there at the moment, in Nottingham, and in Stoke, two studios, Lol

...Last words, my love goes out to all my members, Nick, Hannah, Ryan... I love them all, and most of all to all 'Lupine' fans around the world. See you all soon on the Lupine, 'Undecided Suicide' UK Tour 2010...

Love
Lemmy Lupine
Posted by E.Ruff at 5:47 AM