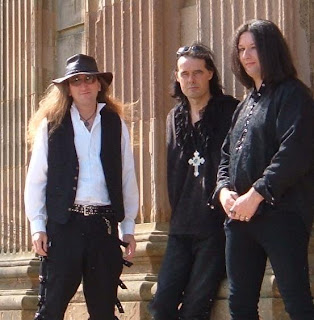 You first formed in 1997, I guess, in a way from the ashes, of at the time '13 Candles', which of course somewhat had a cult status. What was the initial meeting like, and how did things get down to a start ?

Rob: I had known the members of the band for a while, and had acted as a sort of magic act / MC for one of their shows. I bumped into Louis the morning after 13 Candles split and he was talking about packing it all in. I suggested that he should start a new band and offered my services on guitar (not thinking for a second that he would actually take me up on that part of the suggestion) I heard nothing for a few weeks, the one day Ingrid Pitt came to town, and I phoned Louis to let him know about it, we got talking again, and the first practice was a couple of days later.

Your Debut 'Welcome To The Realm…', how was this conceived at the time. Do you think from, the debut, you learnt any important lessons ?

Rob: The debut CD was really well received by everybody, we got a lot of gigs off the back of it, and it contains 'Vampire Eyes', which is still one of the most requested songs in our set, but the actual recording quality makes me cringe now, I find it really hard to listen to. The biggest lesson learned (though it took us another album to learn it fully) was that we really needed to improve the quality of the recording, not just go straight into the studio the moment we had a new song, but to work on it and get familiar and comfortable with it before recording it. During Vampire Eyes, I had someone holding up pieces of paper with the song structure and chord changes on them, all I hear when I listen to that song is my hesitation and uncertainty. I would love to re-record it now!

Apart from having several track's on 'Nightbreed' Compilations, has their been any Label interest ?, (as acquiring you material has been quite a challenge.)

Rob: Label interest, sort of… occasionally we have got into talks with people, but at the time when the talks were happening, they always seemed to be leading away from us having control over the songs, production, artwork etc. We have a fiercely independent streak, that probably has done us no good, but we do have the satisfaction of knowing that every good thing we have done, has been entirely down to us (of course, so has all the bad decisions, ropey recordings, and poor sales!) Finally though, with the next 2 albums, that are already recorded and almost ready to go – we’re proud enough of the songs to start thinking “this really should be released properly” so we shall see…

Early on in your career, you were introduced to the stage by 'Ingrid Pitt', what was the experience like ?

Rob: For me, it was fantastic, I’ve been a fan for years. Also, it was so appropriate as it was Ingrid coming to Chesterfield that had got Louis & I back in touch and led to the formation of the band. Also, as a result of that, Ingrid and I became friends, and still keep in touch regularly, so a fantastic experience all round.

Your music varies a lot, yet still has an underlying, well 'The Realm', feel, or strong identity. Where do you draw your influences from, be it other bands, poetry, or movies ?

Rob: I’m so glad you picked up on that! Right from the very first practice, we decided that we wanted to try and create a Realm sound, but didn’t want to just keep re doing the same kind of songs, the same kind of riffs. We spent a long time trying to work out how to introduce as much variety as possible, whilst still having a consistent sound. To be honest, all these years later, we still don’t know exactly what that is, or how we do it – there’s no formula. We just look at each other and go “nah, that’s not right” or if we’re both smiling, then we got it right again. The influences are again, very varied, and have no obvious logical connection. In my guitar riffs there are brief phrases stolen from all over the place, The Doors, Elvis, Britney, Sex Pistols, Motorhead, Gary Numan and Vice Squad come instantly to mind.

Your BIO, mentions touring a lot, is being on the road for you a great appeal, Do you find the Live experience, more rewarding than the studio environment ?

Rob: YES! Until very recently I’ve always hated being in the studio, I get stir crazy, there’s so much pressure to deliver the ‘perfect take’ that you will then have to live with forever after, the whole process is so slow and tedious, and you hear the songs over and over again so you come out saying “I never want to play those again” Live is just so much fun, going new places, meeting new people, and although the backing is always the same, we do introduce improvisation every night, the songs keep evolving and I can play them however I like. Going back to the studio though, the last 2 albums (the as yet unreleased ones) were recorded at Subzone studios, which is run by an old friend, and ex band mate Danny Worm, and the atmosphere is great, much more relaxed and I really enjoyed making these albums.

Recently your material was broken, down into the 'Bites' compilation. Was this a tactical move on your part, because of the line up changes. Plus you wanted to put to sleep, material you felt wasn’t up to your latter, higher progressed standard ?

Rob: Exactly. As the band develops, and the recording quality improves, and we get better at filtering out the songs that weren’t really up to the standard we would like them to be,it gets harder to go back and listen to the earlier stuff, so we just laid it to rest.

With the Re-formation of '13 Candles', will 'The Realm', still operate as usual. Which will take higher priority, or could the two happily Co-exist, and ever do shows along side etc ?

Rob: Happy co existence definitely. There may be times when we have to choose one band over the other,but that will depend on the individual event as to which band gets preference that night.

Back in 2007 you started recoding material for the next, at least two LP's, how the progress, and can we expect any new releases soon, on the actual table ?

Rob: The recording is finished (and sounds great – I’m now tempted to lay everything before this to rest, and call this our first 2 albums!) We just have to finish designing the covers, and decide whether to self release again, or to go for a proper label this time, we have had one offer…

Rob: More shows
(London would be nice, any offers anyone?)

Contact rob@therealmshop.com, getting at least one of the new albums out, getting www.therealmshop.com known, and developing the live sound even more now that we have added Nick and Hannah to the line up.